A stroke occurs when the blood supply to part of the brain is interrupted (ischemic stroke) or when a blood vessel in the brain bursts (hemorrhagic stroke), allowing blood into the spaces surrounding brain cells. Each year about 795,000 people in the US experience a new or recurrent stroke. Of all strokes, 87% are ischemic and the remainder are hemorrhagic. Ischemic stroke is the third leading cause of death and the most common cause of disability in industrialized nations according to the World Health Organization.

Currently, the most commonly used approved treatment for acute stroke is thrombolytic therapy with recombinant tissue plasminogen activator (tPA). Thrombolytic therapy with IV tPA up to 4.5 hours following stroke is recommended by the American Heart Association/American Stroke Association. The primary adverse effect of tPA in clinical use is symptomatic intracranial hemorrhage, which occurs in about 6% of treated patients. Although tPA is widely available in the US, it is estimated that only 10 to 20% of stroke patients receive treatment with tPA, principally because they present for care >3 hours after the onset of symptoms or are at increased risk for bleeding from concomitant medication use, or for other reasons. Another effective treatment for stroke, albeit less frequently used, is mechanical thrombectomy in patients with documented large vessel occlusion. Use of mechanical thrombectomy, with or without IV tPA treatment, is considered standard of care in patients with documented large vessel occlusion. 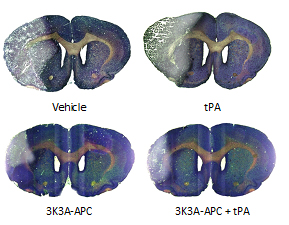 3K3A-APC maintains the cell-protective and anti-inflammatory activities of wild type APC with markedly reduced anticoagulant activity. 3K3A-APC addresses all components of neurovascular unit breakdown during stroke (neuronal injury, vascular damage, and neuroinflammation). In multiple stroke models in both mice and rats, 3K3A-APC shows strong neuroprotective effects as a monotherapy, and the addition of 3K3A-APC to tPA treatment provides benefits beyond those found with either agent alone.

3K3A-APC is one of the most rigorously studied drugs ever to be taken into human stroke patients. ZZ Biotech studied 3K3A-APC alone and the combination rt-PA and 3K3A-APC in a model of embolic stroke in spontaneously hypertensive rats (SHR), among many other models. Treatments were initiated 4 hours after stroke. 3K3A-APC was additionally administered within 3-7 days after stroke. 3K3A-APC significantly reduced infarct area in the presence or absence of tPA (see figure) while improving functional outcomes.

3K3A-APC eliminated tPA’s bleeding risk through protection of the endothelial barrier in multiple rodent studies. Studies in mice also suggest 3K3A-APC can produce neurons from human stem cells grafted into the stroke-damaged mouse brain, with beneficial effects on functional outcomes well after a stroke occurs.These neurons were shown to be integrated into the rodent brains and were critical to the recovery from stroke-induced disability.

ZZ Biotech has completed RHAPSODY, a multicenter Phase 2 clinical trial of its experimental drug, 3K3A-APC, in patients suffering from acute ischemic stroke. This study was supported by the National Institutes of Health through a pair of NeuroNEXT grants.

The placebo-controlled dose-escalation trial was designed to establish a maximally tolerated dose (MTD) of 3K3A-APC in patients with acute ischemic stroke treated with intravenous tPA, intra-arterial thrombectomy, or both. A secondary endpoint was to evaluate the effect of 3K3A-APC on cerebral hemorrhage in this patient population. Study participants, aged 18-90, were followed for 90 days.